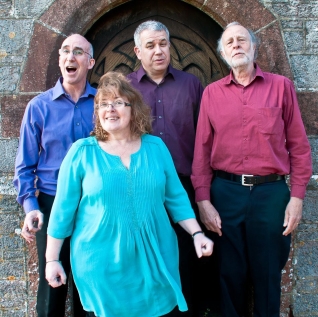 We started singing as a quartet in 2012 when we were asked to sing a couple of ‘Barbershop’ numbers in an Exevox concert – we decided that we enjoyed singing together enough to keep things going and now have a repertoire of around 30 pieces that we perform from memory.  We cover a wide range of genres so that we can present a varied program for every concert (hoping that everyone in the audience will find something that they like!).

Why are we called DCHQ?  Ah well, we liked ‘CHQ’ standing for close harmony quartet and thought that it would be hilarious to put a ‘G’ in front of it when we formed so we could call ourselves GCHQ (“come and listen to us for a change”, etc)  – though we could never decide what the G actually stood for.  It then seemed less hilarious when we were trying to set up social media as we thought ‘GCHQ’ might attract the wrong sort of attention – so without much debate, we changed to ‘DCHQ’ with the D standing for Devon.  This was not meant to imply that we were the best or only CHQ in Devon, just ‘a close harmony quartet from Devon’ and we couldn’t come up with a better idea :).

What do we sound like?  Here is a video of us warming up for a recent performance:

And here is the warm up for another concert in a rather resonant acoustic:

With the help of Chris, our friend and excellent sound engineer, we have dabbled with trying to record ourselves properly – still a work in progress though.  But here is a proper recording of us singing Carolina Moon: